How to solve the plasma cutting groove problem?

How to solve the plasma cutting groove problem?

There are many plasma cutting characteristics, groove is one of them. If the groove is too large, it will bring inconvenience to the subsequent treatment of steel. In this phase, the groove problem will be analyzed and solved. 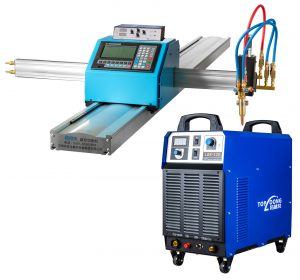 Under normal cutting conditions, the ideal working pressure of plasma should be between 0.4-0.6mpa. The longer the cutting torch cable, the larger the cutting nozzle aperture and the thicker the processed plate, the higher the pressure requirements. Too low air pressure will lead to weak cutting capacity, overheating and melting will occur when the plate is cut, resulting in large and unsightly cuts, and a large amount of slag hanging under the plate. Similarly, too slow cutting speed and too large cutting current will also lead to slag hanging.
The plasma cutting height is about 5mm, which varies slightly according to the material and the type of cutting torch. When the speed, current and air pressure are set reasonably, different cutting heights and angles will also lead to groove.

Figure ① shows the normal cutting, with a cutting distance of about 5mm and a small amount of welding slag.

Figure ③ and figure ④ show that if the cutting torch is too high or too low, it will also lead to abnormal incision. On the CNC plasma cutting  machine with arc voltage regulator, the cutting height is inappropriate, which is mainly caused by the setting of the arc voltage value is too large or too low.
Under normal cutting conditions, increasing the cutting air pressure, reducing the cutting speed, and replacing the plasma and cutting torch with higher precision can effectively reduce the groove phenomenon.